In a move almost as exciting as the unveiling of The Stig on Top Gear, I've decided to tell you about the inspiration behind the dog known as Digger in my book.

I've partly done this because every time I see this particular dog I feel a bit guilty that I have been unfair to him in my book. Digger in Who Framed Klaris Cliff? is not a particularly nice hound. He's very slobbery, bad mannered, and frankly up for a fight whenever possible.

However, the real Digger is a dog called Malcolm who is practically perfect in every way. He's a rescue staffie that was found in the back of a stolen van a few years ago. His owners didn't come forward (for obvious reasons) and he ended up on death row in a dog sanctuary, where his owner Felix the chimney sweep (I'm honestly not making this up) found him and gave him a great home.

Malcolm vibrates with happiness, his little tail whipping like a metronome on fast, whenever he meets anyone, human or canine, and he is the perfect ambassador for rescue dogs.

And he almost never ever dribbles on you.

So here he is, ladies and gentlemen, Malcolm the very happy staffy. 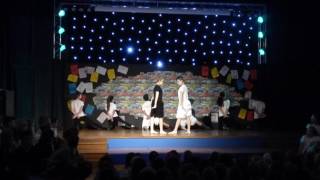 Blogpost about the Swan Boy musical

Goodnight Boy is the Times Book of the Week!

Swan Boy nominated for the Carnegie

Come and see me!

Swan Boy chosen as one of Guardian best new reads!